A history of eyewear / sunglasses

The history of how we have invented and refined tools to help us see better is fascinating and extends all the way back to 750 BC where a “lens” or round piece of rock crystal which might have been used to magnify words on a page was credited. From that time through the first century, where Nero was purported to use an emerald to see the gladiator games better, we see further gains in this regard. Later in that century and into the second, a treatise is found that was composed by a Muslim author depicting and describing the convex lens – this is described and displayed in this seven-volume grouping

From the 9th through the 13th centuries, magnifying stones were produced with greater frequency and refinement. Monks were instrumental in crafting the reading stones for working with and reading the illuminated manuscripts they were famous for from about the 8th century forward. An illustration of the first magnifier used for scientific purposes is next found in 1250, written and illustrated by Roger Bacon.

Finally, we reach the late 1200s where the first wearable spectacles were found in Italy. Made with round holders for the lenses joined by a bridge across the nose, which is sometimes hinged, these first spectacles have wooden frames. This type of spectacle is refined over the next few centuries until we reach the 17th, and we finally see slim metal frames holding the lenses along with cases that are stylish for holding the glasses when not in use.

Flash forward to the mid-18th century and we see the first advent of sunglasses made by James Ayscough with lenses tinted either blue or green. Along about the same timeline, or maybe a little bit later in the 18th century, we see bifocals created for the first time – actually a few decades before Ben Franklin’s time who is often credited with the invention of this dual-sight tool.

Monocles – a lens for just one eye – were popular from the early 18th century on through the early 20th century; however fell out of favor as they were affected by many Nazi officers during World War ll. They have rarely been used since that time. And then in 1929, we see the first polarized lenses used for sunglasses – advertised as the “best under the sun” and created by Edwin Land who then started Polaroid.

Leonardo DaVinci designed contact lenses in 1508, but it wasn’t until 1949 that the first lenses to be worn only on the cornea were invented. Today, 75 percent of all American adults wear corrective lenses or about 225 million. Glasses account for about 64% of these and around 11% wear contact lenses. Interestingly enough, most contact wearers are correcting nearsightedness, which is the inability to see clearly at a distance. A majority of these contact wearers are also female – standing at about 67%.

What is fascinating is how far we’ve come with this unique resource – being able to clearly see because of a curved piece of glass or plastic that helps our natural lens operate like it should. 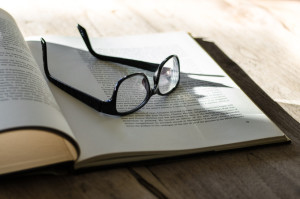